A Gamma-Ray Telescopes Array to Be Placed in La Palma (Canarias, Spain) 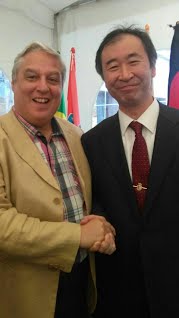 This project is led by Takaaki Kajita, PhD, Nobel Prize in Physics 2015 and director of the Institute for Cosmic Ray Research (University of Tokyo), among others.

The 20 telescopes Cherenkov are going to be placed in the Instituto de Astrofísica de Canarias (IAC), located in the Observatorio del Roque de los Muchachos (ORM) at 2,470 m. The ORM is home to the biggest optical telescope in the world: the Gran Telescopio de Canarias (GTC), which is a 10.4 m telescope. Thanks to the construction of the Cherenkov telescopes, the ORM will continue leading astrophysics internationally.

Researchers from the Physics Department of the Universitat Autònoma de Barcelona (UAB), the Instituto de Física de Altas Energías (IFAE) and the Instituto de Estudios Espaciales (ICE-CSIC/IEEC) are part of the project.

The Cherenkov Telescope Array (CTA) is an initiative aiming to build a new generation of Cherenkov telescopes in order to study the universe using high-energy gamma rays. These gamma rays carry information about the most violent and extreme phenomena that happen in the universe.

Alfonso Rubio-Manzanares (Bqb Team Lead) and Tatiana Kourochkina (Bqb International Relations Manager) attended to the groundbreaking ceremony for the CTA. During the event, he conversed with PhD. Takaaki Kajita about the importance of this scientific placing at an international level and about how amazing the ORM and the Canary island of La Palma are.

Next year the first telescope is going to be installed in La Palma, where MAGIC telescopes are already working. These are considered one of the best telescopes in their energy range.